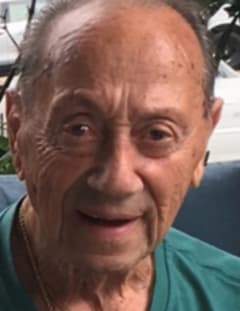 An honorably discharged veteran, he served his country during the Korean Conflict as a member of the United States Army.
Mr. Leone had been employed for over thirty years as an office manager for Heritage Wholesales in Malden until the time of his retirement.

A longtime resident of East Boston and Everett prior to moving to Byfield, Mr. Leone was a member of the Progressive Club in East Boston. He enjoyed visiting casinos, playing Bingo and was an avid football fan, both the college and professional leagues. Most of all he enjoyed spending time with family especially Sunday dinners. He was a loving husband, father, grandfather, brother and friend who will be missed by all who knew him.

In addition to his wife with whom he shared sixty years of marriage, he is survived by three daughters, AnnMarie Lewis and her companion, Paul Pietrantonio of Byfield, Kimberly Leone and her companion, Louie Pires of Everett and Deanna Martin and her husband, Tim of Georgetown and father of the late John Leone, eight grandchildren, David, Darren, Giovanna, Skyla, Nicole, Cameron, Colin and Reese, two sisters, Inese Triola and Delia DeFeo both of Revere and the late Lucy Papandrea and Joseph Leone and several nieces and nephews.

ARRANGEMENTS: His funeral service will be held at the Conway Cahill Brodeur Funeral Home, 82 Lynn St., Peabody on Saturday, May 22, 2021 at 10:00 a.m. Relatives and friends are invited to attend. Visiting hours on Friday from 5 to 8 p.m. and Saturday morning from 9 a.m. to 10 a.m. prior to the service. All attendees are required to wear mask and adhere to social distancing guidelines. Burial at Holy Cross Cemetery, Malden.