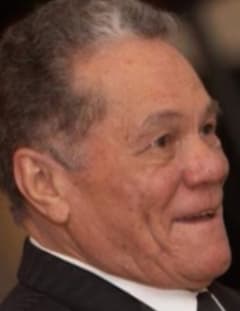 Andres Cotto Ramos, 87 of Peabody, passed away peacefully on June 22 at home, surrounded by his family and friends.
He was born on February 4, 1934, in Caguas, Puerto Rico, son of the late Leoncio and Juana (Ramos) Cotto. Prior to leaving Puerto Rico he was married to Carmen Elena Ramos Cotto. He immigrated to the United States in the early 1950’s and worked hard to be able to bring his family from Puerto Rico to the U.S.
Music was his passion and entertainment while growing, leading to an occupation as a professional musician in the late 50’s. He joined up with Teddy Guerrea’s latin band, played on Cape Cod for the “rich people “ who put him up in a house on the Cape for an entire summer. For a young man it was a lot of fun! In the late 50’s he was played at the Kowloon for 20 years, starting on their opening day.
Andres was a very hard worker primarily as a musician or auto mechanic, He retired from the US Post Office as a mechanic in 1996 where he had worked for 30 years. In retirement he was a furniture refinisher, and delivered car parts for NAPA. He became a snowbird spending time in Tamarac Florida and residing with a daughter in Peabody Ma.
He was married to and raised a family with Sallie L. Ramos (Gillis) in Beverly Mass for 17 years. Later in life he was married to Isabel Ramos (Lossio) for 22 years.
He leaves behind 7 Children, Victor CottoRamos & his wife Dominga of Cedra, Puerto Rico, Andrew Ramos of Wayland MA, Richard Ramos and his wife Sharyn of Auburn NH,Juana Emery and her husband Thomas of Beverly MA, Sharon Doucette and her husband Thomas of Peabody MA, Michelle Gilmore and her fiance Kevin Leininger of Salem, NH and David Ramos and his fiancé Judi Berube ofMerrimack MA. Stepchildren, Nancy LossioRitter, Edgard Lossio and Veronica LossioSosa. He also leaves behind many manygrandchildren, great grandchildren and great great grandchildren, Nieces and nephews. He also leaves behind his companion of 6 years, Aurea Rameriz.
Predeceased by his wife Isabel Ramos,brothers Pedro Cotto, Miguel Cotto, and Alex Cotto, He also leaves behind his sister Carmen Cotto and brother Tebo Cotto.
A visitation will be held on Saturday, June 26, from 1 – 5P.M. at the Conway, Cahill-Brodeur Funeral Home, 82 Lynn St., Peabody, with a service in the funeral home following the visitation. Catholic mass and burial will be in Puerto Rico at a later date.

Michelle, Nick, Kevin and family, Sincere sympathy for your loss. We were so fortunate to meet your dad and enjoy his cheerful company.
- Patty & Kenny

My condolences to my cousins sorry for your loss from his cousin Brunilda Santana Cotto
- Brunilda Santana Cotto
Rich Sharyn and family so sorry for your loss. Rich your Dad had a wonderful spirit and zest for life. He was always so warm and friendly....and oh what a GREAT DANCER...love and hugs to all. He will be remembered dearly . Love Doug Carol & family
- Carol & Doug White