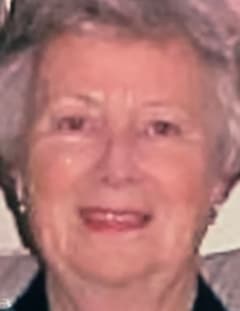 Barbara (MacDonald) Koutrakis, 94, of Peabody, passed away on Saturday, July 17, 2021, at the Ledgewood Nursing and Rehabilitation Center in Beverly.

She was the beloved wife of the late Manuel G. Koutrakis.
Mrs. Koutrakis was born on August 27, 1926, in Boston, MA., daughter of the late John and Geraldine (Barrar) MacDonald.

Barbara is survived by her sons, Paul Koutrakis of Billerica and Steven Koutrakis and his wife Timi of Lynnfield; her daughters, Nancy Cotter and her husband Richard of Foxboro, and Joann Gauthier and her husband Brian of Peabody; a daughter in law, Lisa Koutrakis of Beverly; three grandchildren, Steven Koutrakis, Kelly Wilson, and Ryan Cotter; and her great grandchild, Riley Jade Wilson. She was predeceased by her son Peter Koutrakis.

Her Funeral Mass will be held at St. John the Baptist Church, 17 Chestnut St., Peabody, Wednesday, June 21, 2021, at 11:30 AM. Visiting hours at the Conway Cahill Brodeur Funeral Home, 82 Lynn St., Peabody, prior to the service from 10-11 AM. Burial in St. Mary’s Cemetery, Salem. In lieu of flowers, donations can be made in her memory to the Carmelite Chapel, Northshore Mall, 210 Andover St. Peabody, MA 01960.

Dear Paul, Nancy, Steven,and Joann, I was sorry to hear of your mother's death. She was such a lovely person and such a nice part of my childhood on Crestwood Lane. Just one instance when she got up in the middle of the night to make my sister and I French toast because we were going back to Peabody after spending the weekend at your cottage on the lake and your father was dropping us off before going to work! I often saw her at the Chapel and she was always kind. I remember your father and grandmother and many happy memories. I wished to tell you these memories in person but was late knowing of her death. Fondly, Kathleen Lawlor McEachern
- Kathleen McEachern
Nancy - Every memory I have of your mother is a fond one. My sympathies to you, Paul, Steven and Joann as you mourn your great loss. Treasure the laughter, hold tight to the memories and carry the love that will live in you. Your mother was truly special. Thoughts and prayers to you and your family.
- Cindy Regan Kelly
Steve, Nancy, Joann, and Paul, please accept my sincerest condolences. The memories of our families growing up are eternal. Your mom was the sweetest woman with a heart of gold. My heartfelt prayers go out to all of you for strength and peace during this sad and difficult time. God bless you all. ❤️
- Richard Regan

Joann - Thinking of you and and you family during this hard time
- Leanne Cove
Joann and family, I am so sorry to hear of the loss of your beloved mother. How lucky she was to have received such wonderful care from you. Hope the love and support of friends and family help provide strength to help you through this difficult time. Sending you love and prayers. Deb Santoro
- Deb Santoro
Joann and family, thinking of you during this difficult time. I am so sorry for your loss.
- Kelsey Engvik

I was very fortunate to know and to be loved by Barbara. She never failed to give a beautiful smile after every mass and that smile lit up my days. She collected paper clippings of Indian News and hand delivered them religiously. What a blessing to know your thoughtfulness and care! Miss you Barbara!
- Father Jilson George
Dear Nancy and family, Our hearts go out to you all. It's so hard to say goodbye to such a vibrant force at the center of your family. Hopefully the comfort of friends, the many memories shared, and the strong foundation she built that is reflected in every member of your family will give you support and bring you peace. Much love to all of you Ruth and Tom Jackson
- Ruth Jackson

Dear Nancy and Family...We are so very sorry to hear about your loss. Your Mom was quite a woman! Such a strong, positive, sweet person with always a twinkle in her eye! Holding you all in our hearts. With love, JoAnn & Milo
- JoAnn Robinson