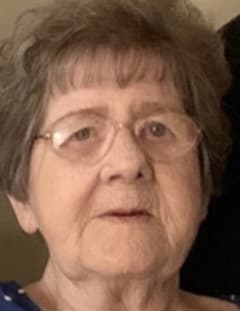 Carol Goodwin-Knowlton, age 86, passed away at home on June 24, 2021. Her children Leanna and David Ampola were by her side along with her cherished caregivers Cida Vieira and Mirian Alvarado.

Carol spent her life caring for children, which is what she loved to do. She worked as a nanny and helped raise several children whom she loved as if they were her own. She helped raise Leanna and David Ampola of Lynnfield, Courtney Marsolais of Peabody/Lynnfield, and several others.

Carol filled their lives with laughter and good times, and enjoyed taking them to Salem Willows, which was one of her favorite places. She provided unconditional love, taught them that kindness mattered, demonstrated the value of hard work, and always insisted they make their beds.

Carol contracted Polio when she was ten years old and spent two years in an iron lung. The polio affected her ability to walk, but it didn’t stop her creative spirit and her ability to make a positive impact on the world. She enjoyed artistic endeavors like Artex painting, making homemade chocolates, and cooking her popular whoopee pies and cream puffs. She also loved to crochet and knit, and enjoyed hosting a weekly knitting group called the “knitwits”.

She was engaged to the love of her life, Rossi, but before they married he passed away suddenly while shoveling snow in December of 1977. She later married Phillip Knowlton of Peabody and was active in the Peabody Elks club, raising money for a variety of charities.

She lived in Beverly and Peabody for most of her life. Her parents were Alice Smith Goodwin and Halstead Goodwin. She had nine siblings and will be greatly missed by her large extended family including her remaining siblings: Janice Utter, Constance Clay, David Goodwin, and Peter Goodwin. She was preceded in death by siblings Ronald Goodwin, Judith Clay, Rhoda Gould, Roger Goodwin, and Russell Goodwin.

Instead of a funeral, Carol preferred that family and friends gather in the fall to celebrate her life. If you wish to be invited, please comment here and provide your contact information. If you want to honor her memory with a donation in lieu of flowers, her favorite charity was St. Jude Children’s Research Hospital.

Cousin Carol was a powerful role model for those who were blessed to be her family or friend. She was caring, kind, and quite able; never letting her polio affected limbs stop her from living & loving the way she wanted. My deepest condolences to Leanna & David on the loss of your beloved 2nd Mom and my deepest gratitude for your care of Carol as she aged. My husband & I would like to attend any celebration of her life. God Bless.
- Susan Joinson

Aunt Carol left us with a wonderful legacy of love and laughter. She was a very special person and her wit and take-charge attitude will be remembered by so many people. Thank you to Leanna and Dave for helping Aunt Carol find peace and comfort in her final days.
- Pat Sudbay

Carol will always be remembered as a giving, kind and always ready to help type of person. She was a very special lady. We would be honored to be included in her celebration of life gathering. Mike & Cyndi Ransom
- Mike and Cyndi Ransom

Leanna and David thank you for taking care of and being by Aunt Carol's! side these last few weeks. You were the best family she could have ever asked for! I love hearing the stories of how she raised you. Nancy Sudbay Sahr
- Nancy Sudbay Sahr

RIP auntie Carol you will always be in our heats
- Michael Goodwin and family
Test in peace Aunt Carol You will be greatly missed by all your family. Leanna and David you are in our thoughts and prayers God Bless you Your selfless love and devotion during these last few weeks of her life brought Carol peace. We hope to see you at the celebration of Aunt Carol's life. Love Sandra & Gary
- Sandra Greenzweig