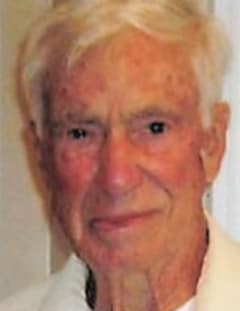 David was born in Salem, MA on April 11, 1927, son of the late Harold and Gladys (Babcock) Lunt. He was raised and educated in Beverly and graduated from Beverly High School. He continued his education, earning a bachelor’s degree from Boston University. An honorably discharged veteran, David served in the United States Navy during World War II and was a member of The American Legion Post Commander 12.

Mr. Lunt had been employed at Shawmut Bank, where he worked as a bank officer. After his retirement, he worked for the IRS in Andover for many years.

David was an active member of the Lake Shore Park United Methodist Church in Lynn for over 60 years. In addition to his church involvement, he was also a member of the Hillview Senior Golf League in North Reading. He was an avid Red Sox fan, but most importantly, he enjoyed spending time with his family. He was a loving father, grandfather, great-grandfather, brother, and uncle and will be missed by all who knew him.

He is survived by his son, William Lunt and his wife, Sandra of Wilmington, his daughter, Julia Rodger and her husband, James of Reading; six grandchildren, Christine Wha, Derek Rodger, Abigail Arocho, Kyle Lunt, Eric Lunt, and Nichole Lunt; three great grandchildren, Morgan and SJ Wha, and Wyatt Arocho. He is also survived by many nieces, nephews, and extended family members. In addition to his wife, David was predeceased by his brother, Robert Lunt and his sister, Barbara McDermott.

We are thinking of you all, during this difficult time. Uncle Dave holds a special place in our hearts. He was always kind and thoughtful. I have so many wonderful memories of him from my childhood. Blessed to have had him as an Uncle! Thinking of you all. Love, Stephanie , Jon, Matthew, Hayley and Laura Weier
- Stephanie Weier