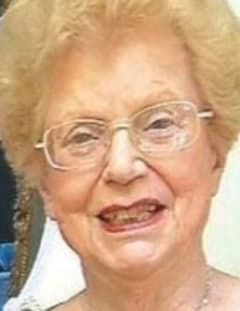 Dorothy (Hardcastle) Hamilton, 91, of Peabody, died Sunday July 18, 2021, following a brief illness. She was the devoted wife of the late Reginald Hamilton.

Born in Bradford Yorkshire, England, she was the daughter of the late William and Ada (Holiday) Hardcastle. She was raised and educated in England and received her associates degree from Hanson Business School in Bradford. She then immigrated to Canada in 1957 and a few years later moved to the United States and has lived in Peabody for the past 57 years.

Dorothy worked as a purchasing agent/buyer for the Cordell Manufacturing Company in Peabody for many years before retiring in 1996.

Dorothy enjoyed traveling, gardening, reading, and her favorite activity was spending time with her family, especially her grandchildren. Upon her retirement, she enjoyed volunteering at the Peabody Council on Aging for over 10 years.

Dorothy is survived her daughter Stacy Waldron of Stratham, NH and her son Robert Hamilton of Tewksbury, her beloved grandchildren, James Hamilton Katz, Samuel Bradford Katz, Ainsley Olivia Katz, Emily Rose Hamilton, and Lindsey Elisabeth Hamilton, and by several nieces and nephews. She was predeceased by her brother, Kenneth Hardcastle.

Visiting hours will be held on Saturday from 10:00 AM until 1:00 PM at the Conway, Cahill-Brodeur Funeral Home, 82 Lynn St, Peabody to which relatives and friend are kindly invited to attend. Her Funeral Service will follow at 1:00 PM at the funeral home. Burial services will be private. In lieu of flowers, donations can be made in her name to the Peabody Council on Aging, 75 Central St, Peabody, MA 01960.

What a wonderful lady. It was my pleasure to know her. I will miss her delightful accent and her beautiful smile.
- Shay Stevens
My condolences to the Hamilton Family. Joe Pimenta
- Joe Pimenta

Sorry for your lose Stacy and Rob. Your mother was a wonderful woman. May your memories of her give you some comfort. Bob & Kathy LaBelle
- Robert LaBelle

Sorry to see the world has lost a true lady. Such a joy to be around at the Senior Center. Godspeed Dorothy. You will be missed.
- Karen Sousa