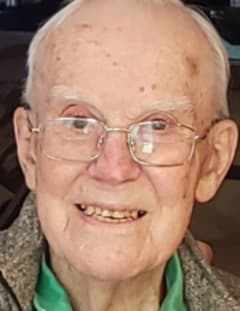 Obituary For Edward B. Cvinar

Edward B. Cvinar, 93, of Pelham, NH, passed away unexpectedly of natural causes Sunday morning, at the Windham Terrace Assisted Living Facility in Windham NH. He was the beloved husband of the late Jean F. (Coady) Cvinar.

Edward was born in Dickson City, PA on June 9, 1928, son of the late John and Mary (Mahala) Cvinar. He went on to serve as a member of the United States Navy, serving during the Korean Conflict. Ed and Jean spent many years raising a family in Everett, MA and later moved to Peabody MA.

Prior to his retirement, he had worked as a claim’s investigator for Hooper Holmes Bureau. He was also a longtime member of the American Legion.

He is survived by his children, David and wife Sharon Cvinar, Dennis and wife Doris Cvinar, Denise and husband Kevin Kilpatrick, Kimberly and husband Matthew Kalayjian; his grandchildren, Kaitlin Kilpatrick-Betley and her husband Darrell Betley, Brandon and Allison Cvinar, Daniel and Jodi Cvinar, Samantha Kalayjian, Sister’s in-law Judy Rencarge and husband Lewis and June Powers, brother in-law William Coady and many nieces, nephews, and friends. He was predeceased by his brothers, John, Steve, and Francis “Frank” Cvinar and their spouses. He was also predeceased by in-laws Jack Swindell, Thomas and Joan Johnston and Linda Coady.