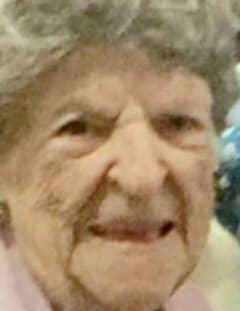 Helen S (O’Keefe) Kolodziej, 103, of Peabody, died peacefully Sunday evening November 22 at the Pilgrim Nursing Home in Peabody following a brief illness. She was the devoted wife of the late John “Kelly” Kolodziej.

Born in Salem, she was the daughter of the late Michael and Katherine (Ruane) O’Keefe. She was raised and educated in Danvers and has lived in Peabody for most of her life.

Helen was a waitress for many years at the Salem Country Club in Peabody and Hector’s in New Hampshire before retiring years ago.

Helen enjoyed playing bingo, crocheting, knitting, gardening, and shopping as well. Her favorite activity though was spending time with her family. She will be dearly missed by all.

Family and friends are asked to start gathering Monday May 17, 2021 at 9:30 AM for a short visitation at St. Thomas the Apostle Church, Peabody, and will be followed by her Funeral Mass at 10:00 AM. Burial will be in Puritan Lawn Memorial Park, Lake St, Peabody.