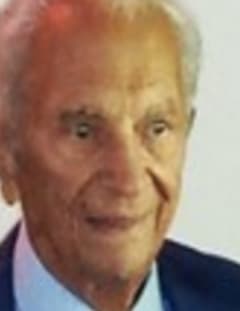 Obituary For James A. Maravelias

James A. Maravelias, of Danvers, passed away on July 10, 2021. James was born on August 11, 1924 in Lynn, MA, son of the late Angelo and Jenny (Spyropolos) Maravelias. He was 96 years old. Jim was the beloved husband of the late Dora (Nekolopoulos) Maravelias. He was the loving father of Alan Maravelias and his wife Nancy of Middleton, Peter Maravelias and his wife Pauline of Wakefield, and Joan Tsapatsaris of Peabody. He was the dear grandfather of Jason, Michael, Sia and James Maravelias, Nicole Lahat and Chris Tsapatsaris. He was also the great grandfather of Olivia, Logan and Gavin Maravelias, Ethan and Alexander Maravelias, Ethan and Olivia Lahat, Peter and Serena Maravelias, and Stella and Emily Tsapatsaris. He was the eldest brother of Socrates of Saugus; George (deceased) of Needham; Ann Laggis of Ayer; Barbara Ciccarelli of Andover: and Esther Lilakos of Roseville, CA.
Jim was a veteran of World War II where he saw action in the Pacific while serving aboard the USS Cabot aircraft carrier. During 2 years in the Pacific he saw significant action including the Battle of Leyte Gulf in the Philippines and the invasion of Iwo Jima. Jim was on board on November 25, 1944 when suicide pilots attacked and caused heavy casualties and massive damage, yet the ship continued on and was dubbed the ‘The Iron Woman’.
After the war Jim founded and became President of Velcar Tool & Die Company in Lynn. He specialized in manufacturing parts for many of the latest electronics which included the first heart pacemaker. Jim lived a very full life. He had 46 wonderful years of marriage with Dora before her untimely death in 1992. And 27 years of delightful friendship with Barbara Shahnaian where they could be caught dancing at any moment! Jim was a friend to many and loved by all.
Relatives and friends are kindly invited to attend visiting hours at the Conway Cahill-Brodeur Funeral Home, 82 Lynn St, Peabody on Wednesday, July 14, 2021 from 4-7 pm. Funeral service will be held on Thursday, July 15 at St. Vasilios Greek Orthodox Church, 5 Paleologos St., Peabody at 10:00am. Burial to follow in Cedar Grove Cemetery, Peabody. Arrangements by the Conway Cahill-Brodeur Funeral Home, 82 Lynn St., Peabody. Donations may be made in his memory to the St Vasilios Greek Orthodox Church, 5 Paleologos Street, Peabody, MA 01960.

Dear Joan and Family, we are very sorry to hear the loss of your dear father. You are in our thoughts and prayers. Love, Jim and Linda Cunningham
- Linda & Jim Cunningham
We were so saddened to hear about the passing of this wonderful human being. We met Jim through Barbara's daughters, Sophia and Pam. We shared many laughs and stories with Jim at family functions. Jim was a true gentleman and a class act. He was kind, generous and personable. We loved hearing about their latest restaurant reviews and dancing adventures. He was full of life and will be missed. Marsha and Joe Lawless
- Marsha Lawless

Alan,Peter and Joan, My thoughts and prayers are with you as you grieve the loss of your dear father. I will always remember how much my parents , Betty and John, enjoyed spending time with your mom and dad. Remembering Uncle Jim with loving fondness. Love, Cousin Dale (Nichols) Nagle
- Dale Nagle
Dear Peter, Pauline and the entire Maravalias Family, I was saddened to hear of the passing of your father. He was kind, gracious, and a gentleman. It was an honor to have known him. You will always have such wonderful memories of him and take such pride to have had Jim as your father. My deepest sympathy. May he Rest In Peace.
- Joyce Dovinos
The words we want to say are difficult to find sometimes. Their journey begins far, far away in the heart. With sincere condolences, Richard and Cheryl Yagjian
- Cheryl Yagjian
Peter, and your entire family I want to express my condolences on the passing of your dad. The loss of a dad, grandfather, uncle or husband is a very sad time, but later you will think back at all the memories and these will help you overcome your grief. May GOD bless him and you all.
- Michael Kravchuk