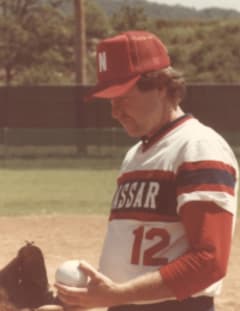 John “Jack” Robert Sweeney, of West Peabody, died peacefully at his residence on Friday, May 29, 2021, with his family by his side. He was the devoted husband of Constance Lillian (Kemp) Sweeney. Jack was born in Malden, MA on September 30, 1936, the son of the late Eugene and Flora (Boudreau) Sweeney, a graduate of Malden High School and a retired construction supervisor for Lee Kennedy Co.

Jack was an accomplished fastpitch softball pitcher for over 40 years playing for many local and tournament teams winning many championships. He was a pitching coach, gifted carpenter, an avid golfer and loved skiing, but his most precious time was spent with his family and friends.

He is survived by his wife, Constance; his two daughters, Kimberly Sweeney and her husband Yohan Moreau of New Boston, NH and Faun Sweeney and her partner Scott Cipriano of Dorchester, MA; a sister, Alice (Sweeney) Gardner of Newton, NH; his two grandchildren, Edmund Muise IV and Briyana Muise both of Florida; a great grandson, Adrian Rodowicz of Florida; and many nieces and nephews. He was the brother of the late Arthur and Eugene Sweeney Jr, Dorothy (Sweeney) Babin and Joan (Sweeney) Dunn.

A private service will be held later. Expressions of sympathy may be made to the Alzheimer’s’ Association, 309 Waverly Oaks Rd., Waltham, MA 02452 in his memory. Conway, Cahill-Brodeur funeral Home of Peabody is assisting the family with arrangements. For guestbook visit ccbfuneral.com 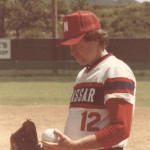 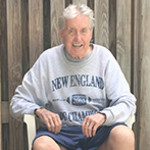 I'm sorry to hear about Jackie. He truly was one of my favorite relatives. Remember a lot of great times from childhood and even later in life. I would attend family events and one thing you could count on was the Jackie and Connie would be there. I haven't seen him to much lately but I will truly miss him. Connie, Kim and Fawn my sincere condolences. I wish I could make it up there. Love you all.
- Wayne McCarthy