Joseph C. Evangelista, age 91, of Lynnfield formerly of Everett, passed away on Saturday, June 18, 2022, at Lahey Hospital & Medical Center in Burlington. He was the beloved husband of Barbara (Moores) Evangelista with whom he shared 64 years of marriage.

Born in Molise, Italy, he was the loving son of the late Umberto and Maria (Giacci) Evangelista. Joseph was raised and educated in Everett and was a graduate of Everett High School, class of 1950.

Joe continued his education at Boston College where he where he earned a Bachelor Degree in Business. Following his time at Boston College, Joseph enlisted in the United States Army and proudly served his country during the Korean Conflict. Upon his honorable discharge from the military, He later went to Boston State College where he earned a Master’s Degree in counseling. Mr. Evangelista worked as a guidance counselor at Malden High School for many years, until the time of his retirement.

“Papa Joe” was known for his bigger than life personality. He was charismatic and touched the lives of everyone he met. Joseph was truly special. He was a beloved husband, loving son, treasured father, grandfather, great grandfather, brother, uncle, and friend who will be missed by all who knew him.

In addition to his wife, he is survived by his four daughters, Joanne Piper of Hamilton, Nancy DeRoo and her husband, John of Peabody, Christine Ross and her husband, COL (R) Ron Ross of W. Newbury, and Teresa Evangelista of Boston and her fiancé, Rich Marchioni of Hingham; his grandchildren, Erica Piper and her fiancé, Michael Friedman, Lynne Smith and her husband, Robert, William, Ross, and Carolyn DeRoo, and Lauren, Justin, and Trevor Ross; his great granddaughter Piper Lily Smith; his brother, Deni Evangelista and his wife, Patricia; he is also survived by nephews, and extended family.

Arrangements: His funeral Mass will be celebrated at St. Maria Goretti Church, 112 Chestnut St, Lynnfield, MA 01940, on Thursday, June 23, 2022, at 11:30 a.m. Relatives and friends are invited to attend. Visiting hours will be held at the Conway Cahill-Brodeur Funeral Home, 82 Lynn St., Peabody, on Wednesday from 4-7 p.m. Burial in Woodlawn Cemetery, Everett. In Lieu of flowers, contributions can be made in his memory to VNA Care Network, 199 Rosewood Dr #180, Danvers, MA 01923. 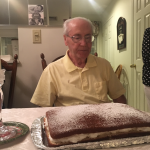