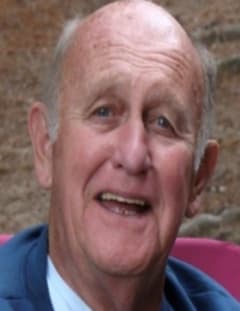 On Wednesday, May 19, 2021, Joseph W. Finegan, Jr., of Peabody, passed away at the age of 86 due to unexpected cardiac complications.

Joe was born on February 11, 1935 in Malden, Massachusetts, the oldest child of Mary and Joseph W. Finegan. Joe was the loving husband of Patricia (Hayes) Finegan for 60 years. They lived together in Peabody for six decades, and there they raised their two daughters, Debra and Susan.

After receiving his Bachelor of Science in civil engineering from Tufts University in 1956, Joe started his career as a civil engineer at the U. S. Army Corps of Engineers. He spent his entire professional career at the Corps, and was Chief of the Reservoir Control Center at the time of his retirement in 1990. He was a revered leader and a respected mentor to many aspiring engineers along the way.

Joe spent decades volunteering on conservation issues for the City of Peabody, first as a longstanding Conservation Commission member. He then served as a volunteer consultant on several environmental projects, work that continued until weeks before his death. For his longstanding environmental work for the city, the Mayor dedicated a bench in his honor at Peabody’s Crystal Lake in 2019.

Joe’s primary passion was his family. He was a loving husband to his wife, whom he met at work when he first started at the Corps. He was a proud father to his daughters, teaching them by example the importance of civic service, kindness, and humility. For the last two decades, much of his time was spent with his grandchildren, Connor and Jack, of whom he was so proud. With weekly family dinners and attendance at countless sports, music, and other events, he was a constant figure in their lives. Among his many loves was his beloved summer house, on Lake Winnipesaukee, the “camp,” which he bought with his father when he was 25.

Joe was also an avid reader, often choosing to tackle lengthy books on obscure topics. He loved to tend to his yard and garden, which brought him great joy and satisfaction. He was a decades-long coin collector, a collection that he just recently passed along to other members of his family.

Joe enjoyed a long, well-lived life. Those who were fortunate to have known him will remember him for his kindness, his dedication, and his infectious smile.

Family and friends are invited to attend visiting hours at Conway Cahill-Brodeur Funeral Home, 82 Lynn Street, Peabody, on Tuesday, May 25th from 5:00 – 8:00 p.m. A Funeral Mass will be celebrated at St. Adelaide’s Church, 712 Lowell Street, Peabody, on Wednesday, May 26th at 10:30 a.m. All attending the wake or funeral must wear a face mask and adhere to social distancing protocols. In lieu of flowers, please send donations in Joe’s honor to the American Heart Association (www.heart.org).

To Pat and family. I was saddened to hear of Joes passing. Joe was a good friend. He was a great person to know and a conscientious engineer. When I first met Joe at the Corps he kept telling me that I had to try skiing. I was scared stiff of the sport but with his constant perseverance I finally went on a ski trip to Canada with Joe and some of his friends. I am still thankful for his perseverance as skiing is now a family activity. Thanks Joe. Bill McCarthy
- Bill McCarthy

Joe was a wonderful man and so dedicated and enjoyable to work with. In particular, very enthusiastic to help the team develop the coastal floodgate project to protect Northshore residents. He was very inspirational and encoraging. I enjoyed him very much and we'll miss a truly great person..rest in peace Joe.
- Bob Hunt, Sr. Project Manager
So sorry to hear about your Dad, Sue. Joe was such a wonderful presence in your life and the lives of your boys. Thinking of you and sending love. Mary and Richard
- Mary Modahl
Joe was a great mentor to many of us in Newton. When we went up to New Hampshire, he was always so welcoming that we instantly felt like family. I remember a few years back, he told me if I could catch a fish, he would show me how to fillet it. I did end up catching a fish and true to his word, he cooked it while telling us stories from when he was our age. I am disappointed my dad did not get to work with him at the Corps because I am sure they would have been friends, but more so, I know he enjoyed his retirement and was always in such a positive mood while spending time with Connor and Jack in New Hampshire. He will be missed! - Cyrus Karl Vaghar
- Cyrus Karl Vaghar
To Pat & Family, We are so sorry for the loss of your beloved Joe. Please know that we keeping you in our thoughts and prayers. Al & Pat Girard
- Al & Pat Girard
Pat, Ann and I are devastated by your family's loss. Joe was a great friend and mentor. I learned so much from him both personally and professionally and will miss him dearly. I was fortunate to work for Joe when I first joined the Corps and he guided me in my early career. I'm glad we had an opportunity to speak a couple of months ago , as usual Joe was his up-beat self. We enjoyed our dinners with both of you. Good Luck Ann and Dick Doherty
- Dick Doherty
I am so sorry to hear about you dad Deb, Keith Alter
- Keith
To Pat and family, I offer my deepest sympathy for the loss of your husband, father and grandfather. Joe was one of the people I've had the pleasure of calling my friend; he was one of the very best of them. A colleague during my time at the New England Division of the Army Corps of Engineers, he always was a positive influence and leader in the work of our mission of serving the flood control and water resources development needs of this region of the country. The nation had no better public servant. Reading that he volunteered his engineering skills to his community comes as no surprise to me; it is just one more mark of the public-spirited man that he was. I will miss his warm smile, his enjoyable phone calls, his many good recommendations of books to read and, in retirement, being together with him at our annual Water Control Branch alumni reunions at Christmas time. I share your loss. I will miss him greatly. Richard (Dick) DiBuono
- Richard (Dick) DiBuono