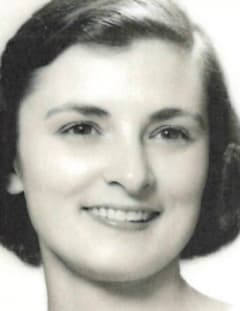 Mary Galluzzi Duff was a remarkable woman. The eldest daughter of an immigrant, she had career choices, so she made the most of the opportunities she had. An outstanding student and a naturally social person, she was a lifetime lover of learning. Upon graduation from Beverly High, she went to Fisher College in Boston where she earned an Associate’s Degree. She had a thriving career as the personal legal secretary to Christian Herter, Jr. at Bingham, Dana and Gould. When Herter was tagged to be Vice President Richard’s Nixon’s top aide, he brought her with him as a part of Nixon’s staff in Washington, D.C. She made many lifelong friends there, but after a year she returned to Massachusetts to marry the love of her life, Paul Duff.

Mary helped support the family as a bookkeeper for the Rantoul Pharmacy until she had the first of her five children when she then dedicated her life to her growing family. Never idle, Mary became actively involved in the community. She was an active member of the Catholic Church and served as President of the St. Thomas Church Women’s Guild.

As devout Catholics, she and her husband were tireless advocates for Civil Rights. Her favorite word was “acceptance.” She believed that everyone should be accepted and unconditionally loved, and she practiced this as her family grew more diverse. She believed acceptance makes life a lot easier, and this prepared her for her biggest life challenge, the birth of her daughter Terri in 1966.

When Terri was born with Down syndrome, there were no established protocols for providing education for children with special needs. A lifelong advocate, Mary was a founding member of the Peabody Parents of Children with Special Needs. Together, she and other parents lobbied for the 1972 passage of Chapter 766, the model for the first federal special education law. Their advocacy helped create the inclusion model for children with special needs and required local school systems to educate every student in their community with appropriate educational funding. Mary was also one of the founders of ARC of the Northeast. In 2008, the ARC gave Mary an award for being an exceptional caregiver.

Mary also advocated for her 3 other daughters and son to have educational opportunities that she never had. With her support, each of her oldest 4 children holds one or more advanced degrees. Always present in a hundred different directions, Mary found time for everyone and her support enabled her husband to advance his career to Vice President of New England Life Insurance Company.

With all of her responsibilities Mary managed to enjoy time with friends in two tennis groups that played weekly. She not only liked to play sports, but like her mother before her, she was an avid Red Sox fan and she passed this down to her children and grandchildren. She also enjoyed watching basketball, golf and tennis.

Mary and her beloved Paul enjoyed travelling around the world from Hawaii to Paris to Egypt and Morocco. They made friends with people they met abroad, and sometimes hosted people they met on their travels. They also took up gourmet cooking, became wine connoisseurs while making close friends who shared their passions.

Mary is survived by her daughter Diane Duff of Alexandria, VA, her son Paul Duff and his wife Vicki of Lebanon, CT, and daughters Eileen Duff and her wife Jan Pelligrini of Gloucester, and Mary Duff Henry and her husband Dan of Peabody, and her sister-in-law Jackie Galluzzi, her brother Nicholas Galluzzi and his wife Donna, her sister Rosanne Hadley and her husband John, her grandchildren Michelle Arnold and her husband Rich, Courtney Duff, Katherine Cook, Jacob Duff, Elizabeth Cook, Erin Duff, and Julia Henry, and many nieces and nephews. She was predeceased by her husband Paul and her daughter Terri.

ARRANGEMENTS: A visitation will be held at the Conway Cahill-Brodeur Funeral Home, 82 Lynn St., Peabody on Wednesday, July 7, 2021 from 4 – 7 p.m. Her funeral will begin at the funeral home on Thursday morning at 9 a.m. followed by a Funeral Mass at St. Thomas the Apostle Church, 1 Margin St., Peabody at 10:00 a.m. Relatives and friends are kindly invited to attend. Burial in St. Joseph’s Cemetery, West Roxbury. The family prefers that masks are worn at all indoor events. Memorial donations are requested to NAACP of the North Shore, PO Box 2405, Hamilton, MA 01982; NAGLY, Witch City Mall, 2 East India Sq., Suite 121, Salem, MA 01970.

"Butch is loose "came the cry down Gardner Street spreading the news from house to house that Paul Duff's pit bull was about to terrorize the neighborhood-again! Mrs. Duff was a second mother for the seven Dullea children and we will miss her very much. Diane and I talked this week about how lucky we were to grow up in such a great neighborhood! There was a tribe of kids and we played and played until the street lights came on! But then we got to be older and Diane hid her cigarettes in the piano in the playroom butMary Lisa was still eating butter and had major league snarls in her hair! We knew Eileen would end up in politics after her campaign to be the manager of our Monkees fan club! So Mrs. Duff, enjoy being with your husband and Terry and say hi to my parents and my sister Eileen. Thank you so much for all you did for us! With much love and respect, Kathy Dullea Walsh aka Fashy
- Kathy Walsh
Dear Eileen and the entire Duff family, Your mother certainly lived a remarkable life! Surely, your Dad met her with open arms. May your memories of your time together, the gifts she gave, the lessons she taught and the love she had for each of you lighten your hearts during these difficult days. You will remain in my thoughts and prayers. Beth (Maguire) Miller
- Beth (Maguire) Miller

So sorry for everyone's loss. She certainly has left a lasting legacy.
- Holly