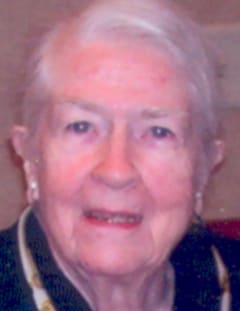 Mary Virginia Ahern, 98, of Peabody, Massachusetts, passed away May 1 at the Brooksby Village Continuing Care Center. Born in Cambridge in 1922, she graduated Cum Laude from Radcliff College in 1942 and served in the Chemical Warfare Corps during World War II. Her experience in WWII led her to work for ABC radio and later, public affairs television programming on such shows as "On Trial", "United or Not" and "Horizons". Ms. Ahern was a television pioneer and became one of TV's earliest producers. She served as Vice President and Associate at Robert Saudek Associates, producers of the "Dow Hour of Great Mysteries" and twenty other television specials including "Opening night at the Lincoln Center" with Leonard Bernstein and the New York Philharmonic in 1962, which was the first live program from the Lincoln Center. She produced features on music, history and theatre for "Omnibus" hosted by Alistair Cooke, including a series of seven programs with Leonard Bernstein and a three part dramatic presentation of the U.S. Constitution with the historian Richard Hofstadter. She was also a script editor for "Profiles in Courage," the 26 one-hour series based on John F. Kennedy's book, as well as the editor and production coordinator for Walter Kerr's "Guide to the Theater."
Ms. Ahern was the first curator of the Paley Center for Media (originally the Museum of Broadcasting) and served on the Advisory Board of the Research Center for Arts and Culture at Columbia University. She also served as an Acquisitions Specialist at the Library of Congress from 1986-1989, and brought the entire NBC Archives of Radio and Television for preservation at the library. Ms. Ahern received Radcliffe College’s Alumnae Achievement Award in 1967. In 2017, she gave a 2 hour interview about her career achievements (see interviews.televisionacademy.com).
She is survived by three nieces, Mary H. Ahern and Sharon A. Ahern, both of Albuquerque, New Mexico and Joan N. Curry of Falls Church, Virginia. They will all miss her terribly.
Services will be held privately when Covid restrictions permit. Memorial gifts in her honor may be made to The Arthur and Elizabeth Schlesinger Library at Radcliffe College. For her online guestbook, please visit ccbfuneral.com.

Mary was a treasure and a most accomplished woman. She helped out when she could on CBS TV's "Young People's Concerts" with Leonard Bernstein, and produced and directed by her old friend Roger Englander. Mary's expertise was greatly appreciated. She even hosted a dinner for the staff at her home with her mother, too, and it was a jovial evening. I have a beautiful flower photo by an artist named Mary Ahern, possibly a relative. I treasure this and now my memories of Mary herself. Nancy Wight, New York.
- Nancy Wight
It was a great privilege to know Mary. She had wonderful stories, immense generosity, and a delightful wry humor. We will miss her immensely.
- JayWegman