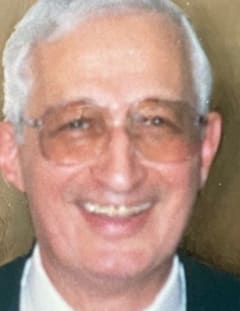 Nicholas George Marinakis, DND of Brooksby Village, Peabody, previously of Lynnfield died on June 24, 2021, at the age of 86. Born in Boston to Anna and George Marinakis, Nick was proud of his Brick-Bottom roots in Somerville. Nicholas will be lovingly remembered by his wife of 61 years, Virginia, and his son George (Molly) of Reading and his son, Eric of Eastham. He will be sadly missed by his four wonderful grandchildren, Nicholas (Tchelsea), Leah, Theo and Alex. Nick is also survived by his sister, Electra (Evan) of Windham, NH and is predeceased by his sister, Phyllis (Kimon) of Richmond, VA.
Nicholas had a long and successful career in dentistry, practicing into his 80s in North Reading. He is past President of the New England Dental Society, The Alpha Omega Council, and the St. Vasilios Greek Orthodox Church. Nick loved volunteering, being with family, having large parties with friends, fishing with his sons and playing tennis and pickle ball.
A wake will be held at the Conway, Cahill-Brodeur Funeral Home in Peabody on Sunday, June 27, from 3 – 7P.M. A Funeral Service will be held on Monday, June 28, at 10 A.M. at the St. Vasilios Church in Peabody followed by a burial at the Forest Hill Cemetery in Lynnfield.
In lieu of flowers, a memorial donation may be made to the St. Vasilios Elevator Fund (5 Paleologos St., Peabody, MA 01960) or the Michael J. Fox Foundation for Parkinson’s Cure (P.O. Box 5014, Hagerstown, MD 21741-5014).

uncle eric, theo, and alex im so sorry to hear about the passing of your father, grandfather. he was such a nice guy to be around. ill always remember him laughing with my grandparents helen, and george gatzunis. he was definitely the life of the party when he was around them may his memory be eternal love rachel gatzunis
- rachel gatzunis

Ginny and Family We are so truly sorry to hear of Dr. M's passing he was a great man, friend and co-worker. He will be missed by all.
- Love Kevin and Susan Gill