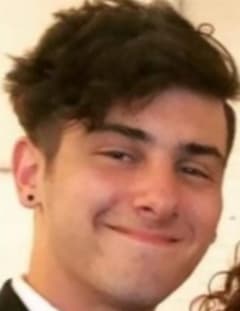 Nicholas “Nick” DellaCroce, 18, of Peabody, passed away Thursday evening following injuries sustained in a motor vehicle accident.
Nick was born in Beverly, on March 10, 2003, son of Dana DellaCroce and Rachel (Small) DellaCroce. He was raised and educated in Peabody, recently graduating from Peabody Veterans Memorial High School, Class of 2021. He had been accepted to Berklee College of Music, but was planning to start his college career at Salem State University this fall.
He was currently employed at Trader Joe’s in Peabody and Cycles 128 in Beverly. His true passion was music. He learned to play the drums at the age of 9, and had also learned to play the piano, guitar, and was a vocalist. He was the drummer and lead vocalist in the band “Time that Remains” with his twin brother Jake.
He is survived by his loving parents, Rachel (Small) DellaCroce, Dana DellaCroce and his partner Kelly Jameson; his identical twin brother, Jake DellaCroce of Peabody; his maternal grandmother, Margaret Somer; his aunt and uncle Rebecca Small and her husband Steve Aldeus, and aunt and uncle Mark and Susan DellaCroce; his step-grandmother, Frederika Goldenstein Reif Small; his cousins, Marcus and Eli Aldeus, Mark DellaCroce and his fiancé Ashley Blanchard, Gerard DellaCroce, Hannah and Ryan Mills; his step aunt and uncle Jessica and Benjamin Reif-Caplan, step-cousins Moshe and Mina Reif-Caplan; his girlfriend, Brigid McDonald, and many extended family, cousins, and friends. He was predeceased by his paternal grandparents, Richard and Rosemarie DellaCroce, and his maternal grandfather, Elliot M. Small.

Visitation followed by a service will be held on Friday, July 23, at the Conway, Cahill-Brodeur Funeral Home, 82 Lynn St., Peabody from 2-7P.M., a service will be held in the funeral home following visiting hours. In lieu of flowers, donations may be made to the: The Nick DellaCroce Scholarship Fund, Attn: TD Bank, 635 Lowell Street, Peabody, MA 01960.

I am so sorry for your terrible loss. My thoughts are with you.
- Justin McLean

Nick will be in my thoughts and prayers. So sorry for your loss Dana, Rachel, and Jake.
- Tory Scolaro

My thoughts and prayers are with Nick's Family and Friends.
- Keli Khatib
I did not know Nicholas I cannot imagine your pain Upon reading his obituary I felt a connection to his love of music I'm from a musical family My brother was Director of Music in Beverly for 36 years My prayer is that Nicholas' life inspires people for decades to come and his scholarship fund flourishes
- Joyce Fowler

I am so very sorry for your loss. Sending prayers and strength to the family.
- Martina Doucette
Words, however kind, can't begin to mend your heartache, but those of us who care for all of you truly share your grief. Wishing you comfort and sending our deepest condolences. Bill, Sharon, Lewis, Will & Spence.
- Sharon Raimo

I am so sorry for your loss. My thoughts are with you.
- Fran Weiner

My prayers and deepest condolences to the family. May God bless him and his family and may Nick forever rest in peace.
- Diane Silva

I am so sorry for your loss. God be with Dana, Rachel and Jake to help you get thru this.
- Amy MacKenzie & David Faria

Thoughts and prayers to the entire family and community in this tragic loss. God bless this young man and his untimely death at such a young age. Finnegan Family
- Douglas Finnegan