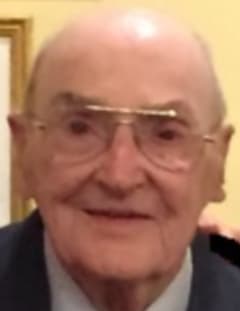 Peabody – Robert E. Douglas 98, beloved husband of over sixty-nine years to the late Priscilla M. (LeCain) Douglas, died Sunday, May 9, 2021 at home surrounded by his family.

Born in Dundalk, MD, he was the son of the late Hazen and Helen Brown (Halse) Douglas. He graduated from Peabody High School, class of 1940. After completing his service in the Army as a Sergeant in WWII he continued his education earning a Master of Education from Salem State Teachers College, class of 1954.

Mr. Douglas had been employed for thirty-five years in the Business Department at Lynn English High School as a bookkeeping and accounting teacher where he was loved and admired by all of his students, until the time of his retirement in 1990.

A long-time resident of South Peabody, he faithfully attended Austin Square Baptist Church in Lynn for the past seventeen years and he was a former member of the Second Congregational Church in Peabody. He was a loving father, grandfather, great-grandfather, friend and neighbor who will be missed by all who knew him. He found great joy in celebrating holidays, especially Christmas with his family, summers around his pool and sitting on the front porch with his wife visiting with his wonderful neighbors.

Surviving him are two daughters, Jean Trueira and her husband, Brian and Leslie Grayton and her husband, Rob all of Peabody, four grandchildren, Michael and Cory Fletcher and Leigh Anne and Philip Trueira, six great grandchildren, a sister-in-law, Evalyn Douglas of Peabody and many nieces and nephews. He was also the father of the late Barbara Douglas Tsoukalas and brother of the late Malcolm and Bruce Douglas.

ARRANGEMENTS: His funeral service will be held at the Austin Square Baptist Church, 10 Keslar Ave., Lynn on Thursday, May 13, 2021 at 10:00 a.m. Relatives and friends are invited to attend. Visiting hours at the Conway Cahill-Brodeur Funeral Home, 82 Lynn St., Peabody, Wedensday from 5 to 7 p.m. Burial in the Cedar Grove Cemetery, Peabody. All attendees are required to wear a mask and adhere to social distancing guidelines. In lieu of flowers, contributions may be made in his memory to Austin Square Baptist Church or to My Brother’s Table, 98 Willow St, Lynn, MA 01901.

RIP Mr. Douglas. You were a great teacher. LEHS class of 1984. Jayne Day-Ashurst
- Jayne Day-Ashurst
Many memories come to mind when thinking of Bob. My children and I spent many hours with his family having fun in his backyard having cookouts and swimming in the pool. year after year. He had the most beautiful flowers surrounding his yard and he took pride in keeping everything in perfect condition. He was generous with his time and was always ready with a helping hand. thanks for the memories Bob and may you rest in eternal peace with Priscilla and Barbara. - Peggy Thomas
- Peggy Thomas