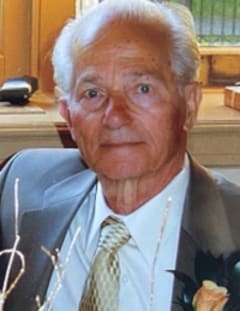 Born and raised in Longanikos, Greece, he was the son of the late George T. and Stavroula (Markos) Poulopoulos. He emigrated to the United States in August of 1951 arriving at Ellis Island, NY. He settled in Haverhill, MA for a brief time with his uncle, Stilianos Poulopoulos before moving to Lynn where he has since resided and where he worked in the shoe factories for many years.

Prior to his retirement, Mr. Poulopoulos had been employed for twenty-two years as an aircraft engine mechanic at the General Electric Company in Lynn where he specialized in the assembly of the F404 after burners which powered the Navy’s F-18 Hornet fighters.

A humble man of strong faith, he was an active member of St. George Greek Orthodox Church in Lynn for the past sixty-seven years. He was also a member of the Logganikos Society. As a member of the Society, he also enrolled his grandchildren annually to support its goal and mission. He travelled back to his homeland many times with his children and grandchildren to instill in them the values, traditions and beliefs which he was accustomed to in his childhood years.

Mr. Poulopoulos was a handyman and the person everyone went to when they needed something repaired. He was loved and respected by all. Most of all he enjoyed spending time with his children and grandchildren. He was a loving husband, father, grandfather, great-grandfather, uncle and friend who will be missed by all who knew him.

I'm deeply sorry for your loss. I feel so lucky to have met such a special, sweet, and honorable man. His legacy lives in the beautiful family he raised and watched grow. I fondly remember his bright smile as he held his great-grandchildren on his lap. Sending prayers and comfort to the Scangas family and extended family,
- Margaret McGovern
My deepest sympathy to the entire Poulopoulos family in the passing of your husband, father, grandfather and great-grandfather. Especially send my condolences to George Poulopoulos and his wife, Katherine, Stephanie Scangas and her husband, Angelo. Memories of his wonderful life will sustain you all for years to come. May his memory be eternal.
- Stephen S Kalivas