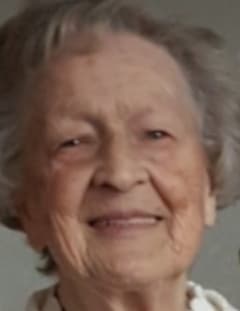 Theresa L. Sullivan, 97, of Peabody, died peacefully in her sleep on June 12, 2021, following a brief illness. She was the beloved wife of the late William C. Sullivan, who passed away in 1987.
Theresa was born in Grand Falls, New Brunswick, Canada, on March 24, 1924, daughter of the late Edmond and Ernestine (Gagne) Levesque. She grew up in Canada, attending St. Basile High School in New Brunswick, and then St. Joseph School of Nursing in Montreal in 1945. She moved to the United States in 1950, working as a nurse at Anna Jaques Hospital in Newburyport for 2 years.
She was a very active member of St. Ann’s Church in Peabody, where she also served as a Eucharistic Minister, bringing Communion to those that were home bound, and she enjoyed visiting the sick. She also enjoyed tending to her garden and most importantly being surrounded by her family, especially her grandchildren.
She is survived by her children and their spouses, Dennis and Annemarie Sullivan of TN, Denise and Tom Stewart of AZ, Mary Sullivan of Salem, Paula and Richard Faino of Danvers; her grandchildren, Timothy Sullivan and his wife Tanya, Justin Sullivan, Kristi Davenport and her husband Bryan, Ryan Stewart, Ricky and Michael Parks, Matthew Faino; a great-granddaughter, Charlene Sullivan; a brother, Philippe Levesque, and many nieces, nephews, her little friend, Laurie Fowler, and many very dear friends. She was predeceased by her children, David and William Sullivan; and her 12 siblings.
Visiting hours will be held on Thursday, June 17, from 4-6P.M. at the Conway, Cahill-Brodeur Funeral Home, 82 Lynn St., Peabody. Her funeral mass will be held on Friday, June 18, in St. Ann’s Church, 140 Lynn St., Peabody at 10A.M. Burial will follow in Puritan Lawn Memorial Park, Peabody. Memorial donations may be made in her memory to St. Ann’s Church, 140 Lynn St., Peabody, MA 01960.