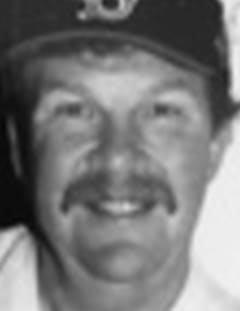 Obituary For Thomas A. Doyle

Thomas A. Doyle, 73 of Running Hill Road was met at the rainbow bridge by the many dogs that he had and trained when he passed away Saturday, October 31, 2020, at the Maine Veterans home.
He was born in Boston, Massachusetts, September 3, 1947, the son of Helen Doyle.
He attended Massachusetts schools and graduated from Peabody High School in 1965, where he held the strike out record for many years. Tom was then drafted by the Cincinnati Reds Baseball organization.
After sustaining a baseball injury, he joined the United States Air Force and served during the Korean Conflict.
After his service to his country, he served on the Peabody Police Force for many years until his retirement.
He and his wife Maggie moved to Maine, where they owned and operated Running Hill Kennels in Scarborough.
Tom is predeceased by his mother Helen and a sister Kathleen Doyle.
Survivors include his wife Maggie Doyle of 29 years of Scarborough; two sisters Debbie Doyle of Peabody and Diane Doyle; sister-in-law Colleen Swetman and her husband Jim of Rochester, N.Y.; and their three daughters Shannon, Kelsey, and Brenna; and brother-in-law Tim Conway and his wife Kim of Howell, N.J.; and their three sons Jamison, Joshua, and Neil; and to all the wonderful friends that were a part of his life. He loved you all.
Tom was a member of the Fraternal Order of Eagles # 2977 and American Legion # 62, Westbrook, Maine. He was Captain of the Westbrook Pool Team and played for many years.
He enjoyed all of the New England Sports Teams especially the Boston Red Sox, music and singing his heart out. "Under the Boardwalk" will forever be his song and St. Patrick's Day will never be the same.
A memorial visitation will be held on Saturday, June 12, from 11-2 at the Conway, Cahill-Brodeur Funeral Home, 82 Lynn St., Peabody, MA, followed by a funeral service in the funeral home at 2P.M. A graveside service, with military honors, will be scheduled in the future for the Southern Maine Veterans Cemetery in Springvale. For those wishing to make memorial contributions in his memory please consider the Scarborough Police Canine Unit, 275 U.S. Route 1, Scarborough, Maine 04074, or to the Peabody Police Canine Unit, 6 Allen Lane, ATTN: Sharon McGill, Peabody, MA 01960.

My condolences to Tom's family and many friends. I got to know Tom from highschool days. He was always a gifted baseball pitcher, a good friend, and great person to know. Tom always had a smile and helping hand to those who needed it. He will be missed by all of us who were lucky enough to know him.
- Michael Kravchuk