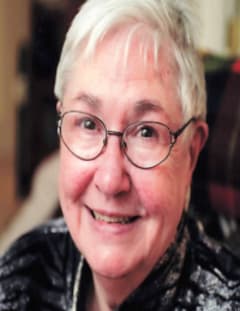 Gloria Lorraine (Gagnon) Lawrence, 91, of Peabody was peacefully raised to the Lord on Sunday July 18, 2021. Born in Salem, she was the youngest of nine children born to Marie Anna (Thibeault) and Luc Arthur Gagnon.

Gloria was educated by the sisters of Notre Dame of the Assumption of the Blessed Virgin. She attended St. Joseph’s Grammar School in Salem, followed by the Academy’s classical course, graduation with honors in 1948. Further studies for and Associate Degree were undertaken at Salem Commercial Business School. She later added evening courses in Psychology, Philosophy, and advanced mathematics at Beverly Community College. Her tailoring and millinery skills were developed at the Essex Agricultural Institute in Middleton, and publicly displayed by her daughter’s First Communion attire, then her wedding gown with Camelot cap and trailing veil.

Gloria worked for Attorney Bill Reardon in Salem and for Bill Reed, Treasurer of Bostic in Middleton. After a temporary retirement, she worked for the City of Peabody’s Public Service and Fire department for eleven years. This coincided with her entrance into the Order of the Carmelites Discalced Secular (OCDS) in 1988. She served as President of the large community for six years.

Her funeral will be celebrated on Friday at 10:00 AM at the Conway, Cahill-Brodeur Funeral Home, 82 Lynn St Peabody followed by her Funeral Mass at 11:00 AM at St. John’s Church, Peabody to which relatives and friends are kindly invited to attend. Visiting hours will be held on Thursday from 4:00 until 7:00 PM. Burial will be in St. Mary’s Cemetery, Salem. In lieu of flowers, memorial contribution may be made to the Discalced Carmelite Nuns, 15 Mt. Carmel Rd, Danvers, MA 01923.

Dear Charlie, Kathy & the Lawrence family, We are so sorry for your loss. xo
- Neil & Tricia (Quinn) Magesky
What a joy and privilege it was to know Gloria and work with her in the Secular Carmelites. May she rest in the eternal peace of God's love! Justine Tilger
- Justine Tilger