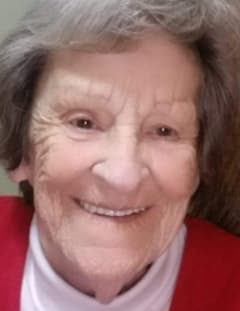 Peabody - Janet (Sullivan) Whitmore, 86 of Peabody, passed away peacefully at her home on April 23rd after a brief illness. Born in Peabody on January 18, 1935, she was the daughter of the late George Sullivan and Marion (McNeil) Sullivan. A lifelong Peabody resident, she attended St Johns Parochial School and graduated from St. Johns High School, Class of 1952.

Set to embark on her career as a teacher, she enrolled in Salem State College in 1953, but met her future husband that summer and decided to postpone college to work, while he finished his tour of duty in the United States Air Force.

In September 1955, Janet married Robert Whitmore and after a honeymoon in New York, they resided in Peabody raising four daughters and a number of beloved dogs.

Janet was a master seamstress and lovingly handmade most of her children's clothing and many of her grandchildren's holiday outfits through the years. She was also an avid knitter and created beautiful blankets, sweaters and hats for her family.

Janet worked as a data processor for Bryant Data Services for many years until she went into banking and worked as a loan processor at Danvers Savings Bank up until her retirement in 2003.
She was a loving wife, mother, grandmother and great-grandmother. A true matriarch of the family, her presence in our lives will be sorely missed but lovingly remembered forever.

Her funeral will be held from the Conway Cahill-Brodeur Funeral Home, 82 Lynn St. Peabody on Friday, April 30, 2021 at 10:00 a.m. followed by Funeral Mass at St. John the Baptist Church, 17 Chestnut St., Peabody at 11:00 a.m. Visiting Hours are Thursday April 29th from 4-7 p.m. Family and friends are respectfully invited. Burial will be at the Puritan Lawn Memorial Park, Peabody. Donations in Janet's memory may be made to the St. Jude Children's Research Hospital, 501 St. Jude Place Memphis, TN 38105.