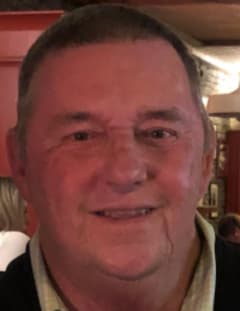 Michael F. Schulze, husband of 50 years of Mary (Williams) Schulze of Peabody died April 28, 2021, at the Edith Nourse Rodgers Veteran’s Memorial Hospital in Bedford following a long battle with cancer. Born March 13, 1945 in Lynn, he was the son of the late Frank H. and Priscilla (Turpel) Schulze. He was a proud 1965 graduate of Lynn English High School.
During the Vietnam War, Mike served his country in the US Navy. As a loyal member of VP 24, Mike and his shipmates tracked Russian subs off the coast of Iceland.
After serving his country, Mike spent 45 years working in the auto industry. Mike's love for cars and natural outgoing personality allowed him to thrive as a car salesman. He was well-respected by his long-term customers throughout the North Shore. He worked at Anderson Foreign Motors in Woburn, Volvo Village in Brookline, and 25 years as Used Car Manager at Stutz Volvo in Salem.
Outside of work, Mike’s passion was politics and civic engagement. He served as a consultant for a number of campaigns at the local, state, and national level. Starting in 1982, he worked diligently in every campaign of Sec. of State John F. Kerry. He was elected twice as national delegate to Democratic National Convention. First, in 1984 for Senator Gary Hart (D-CO) with his mother, Priscilla, and again in 2004 for Kerry.
Mike also thrived in local politics. He served three terms as the Chairman of the Peabody Democratic City Committee.
Mike's volunteer spirit led him to serve on a number of local and state committees. He was a founding member of the Peabody J.C.'s, Past President of the AOH in Division 11 in Peabody, Chair of the Peabody Community Preservation Committee, and Commissioner of the Essex Heritage Board. Mike was honored to be named 2019 Democrat of the Year by the Peabody Democratic City Committee. He was also recognized for his years of community service, particularly his work to preserve Brooksby Farm, by having a street named in his honor near the farm.
Mike loved music, especially Bob Dylan, art, history and genealogy, and antiques and collectibles. Many a Sunday he spent at antique stores and flea markets with his son looking for political memorabilia for his collection. He also loved to travel, especially to Ireland where he visited multiple times to enjoy the scenery, visit Mary’s relatives, and enjoy a Guinness.
Most important to Mike was his family. He was a devoted husband, father, and father-in-law. In addition to his wife, Mike is survived by his son Joshua of Salem, Oregon, son-in-law Bernardo J. Castro, his adored Aunt Mrs. Avis McClennan of Stoneham, in-laws James and Patricia Williams of South Hamilton, nieces, nephews, grand-nieces and grand-nephews, and several close cousins throughout Massachusetts, New Hampshire, and Florida. Besides his parents, Mike was predeceased by his brothers David (Kathy) and Mark.
The family wish to thank all of those who took time to visit and call during Mike’s long illness. The kindness of neighbors, friends, and family is appreciated beyond words. The family would also like to thank the nurses and caregivers of Care Dimensions and the VA for their outstanding care during Mike's illness.
Burial will be private. A celebration of Mike's life will be held at a later date. Donations in Michael’s name may be made to Care Dimensions, 7Sylvan Street, B-102,Danvers, MA 01923 or Friends of the Peabody Council on Aging 75R Central Street, Peabody, Ma, 01960

I have known Mike since high school. Always bright, funny and friendly. I has been my honor to have known him. - Sarah Scott
- sarah Scott
I had the pleasure of working with Mike for 10 years at Stutz Volvo, he was an incredible human being and it was an absolute pleasure to know him and his wonderful family. My deepest condolences
- Erika Gorey

I am a childhood friend and neighbor of Mike and his brothers. I am sorry to read of his passing, may he rest in peace. My deepest sympathy to his family.
- Roland DiFillipo
Mike will always be Mr Democrat to me a great guy good friend so helpful to me in my campaigns and someone who never forget where he came from my deepest sympathy to his family and Rest In Peace my friend
- John OBrien
I don't know you I'm so sorry to hear about your husband passing he is now resting in peace may god be with you and your family you are all in my prays always remember the good times you had with him
- Lorraine Butler

I had the pleasure of meeting Mike when I became the clerk for Community Preservation in 2004. His passion for all things history, affordable housing and open space knew no bounds. He always had a great story to tell and I never left a meeting without learning something new. His passing is as big a loss to the city as it is to his friends and family. Thankfully "Schulze Way" will help keep his memory alive. May he Rest In Peace. Dianne Marchese
- Dianne Marchese