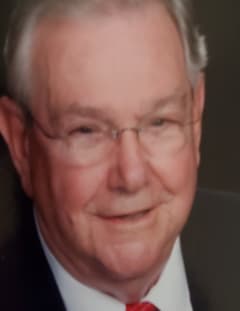 Born in Swampscott, he was the son of the late Sherman G. and Helen M. Yeaton. He grew up and lived most of his life in Lynn and graduated from Lynn English High School, Class of 1942. It was there that he met the love of his life and future wife and they maintained their connection to the class by serving as co-chair of the Reunion Committee for many years until their Seventieth Reunion, which was their last.

After graduation, Bob enlisted in the Coast Guard and proudly served his country on Attu in the Aleutian Islands during WWII. After Bob returned home from his service, he and Louise were married on October 5, 1946 at the Washington Street Baptist Church. This church became an important part of their lives and they were active members of the church community, with Bob serving as a Deacon for many years. Bob and Louise were truly devoted to each other and they spent seventy-two years together in a loving marriage that was an inspiration to everyone who knew them.
Bob had a successful thirty-nine year career with the General Electric Company, working in many different locations including Boston, Cambridge, Westwood, Woburn and Wilmington. He retired in 1985 as a Product Service Manager in the Major Appliance Division.

In 2003, Bob and Louise moved from Lynn to Brooksby Village in Peabody where they enjoyed many wonderful years with the friends they made there.
Bob was a true gentleman and an intelligent, considerate man who had an abundance of patience. He was the kind of father every child would want – willing to help with anything, always there when needed, and interested in everything that was important to his children. He was a loving, caring and giving father, grandfather and friend who always put the needs of others ahead of his own. Nothing was more important to him than his family, and his children, grandchildren and great-grandchildren meant the world to him. He will be deeply missed and forever loved.
Left to treasure Bob’s memory are his daughter and son-in law, Cynthia and Robert Brooks of Danvers, his sons and daughters-in-law, Robert P. Yeaton and Joline of Boxford, Ronald and Catherine Yeaton of Rye, NH; his grandchildren, Katie Hamwey and her husband Travis of Worcester, Joel Yeaton and his wife Kristin of Bedford, NH, Jana Yeaton of Worcester, and Lindsey McCaleb and her husband Charles of Boxford and his great grandchildren, Magie and Emily Yeaton and Olivia and Luke McCaleb. He was pre-deceased by his sister, Lucy M. Smith.

Arrangements: A private family graveside service will be held at Pine Grove Cemetery in Lynn with Bob’s granddaughter, Rev. Jana Yeaton officiating. Military honors will be provided by the US Coast Guard.