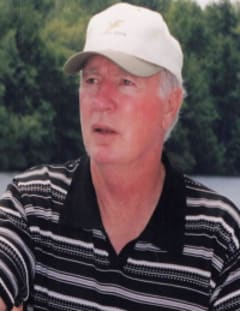 William L. Gregory Sr., 81, of South Peabody,, died peacefully on Sunday, June 20,2021 at the NSMC Salem Hospital with his family by his side and after a 25 year battle with Parkinson Disease. He was the loving husband of 62 years to Dorothy Ann (Cormier) Gregory.

He was born in Peabody on August 23, 1939, the son of the late Robert E. and Doris A. (Messervey) and was a graduate of Peabody High school and a lifelong resident of Peabody. Bill had been employed as Truck Driver with United Parcel Service (UPS) for 38 years and was a member of the Teamster’s Union prior to his retirement. He had served in the US Air Force from 1958 until in discharge in 1964 and was a veteran of the Vietnam War.

Bill enjoyed going up to the Terrace Pines Campground in Ossippee, NH and was a member of the Indian Mound Golf Club and also was employed there during his retirement. He had a love of music and playing his guitar and just recently played with his grandson for a rolling concert at the Rosewood Nursing Home, Peabody. He also displayed his talents with paintings.

He is survived by his wife, Dorothy,, two sons and a daughter-in-law, Wiliam and Natalie Gregory Jr. of Topsfield, and Keith Gregory of Peabody, three daughters and a son-in-law, Darisse Romano and her companion, Richard Fox of Medford, Brenda Dailey, wife of the late Richard Dailey and her fiancé, Robert Holloway of Warwick, R.I. and Nicole and Michael Gilligan of Newmarket, NH, a brother and sister-in-law, Arthur and Dianne Gregory of Wakefield, NH, Eleven grandchildren, Eight great grandchildren and many nieces and nephews.

A Visitation will be held on Thursday, June24, 2021 from 4:00 until 8:00 PM at the Conway, Cahill-Brodeur Funeral home at the 82 Lynn St., Peabody facility. A Funeral Service will be held on Friday at 12:30 PM at the Veterans Lot 111 in Cedar Grove Cemetery, Peabody Relatives and friends are kindly invited. Expressions of sympathy may be made to the Michael J. Fox Foundation for Parkinson Disease, P.O. Box 5014, Hagerstown, ME 21741-5014 in his memory. For guest book, visit www.ccbfuneral.com

Don and Bill had many "good times" together as friends and coworkers. As couples we shared lots of happy times and sad times. We are sadden by his loss, but know that he is at peace with God in Heaven. Our sympathy to his dedicated and loving family. Love, Don & Lu Provost
- Don & Lu Provost
The Art and Cathy, I'm so sorry for your loss. My prayers for your entire family. Janice Comeau Patrizz
- Janice Comeau Patrizz
Have great memories golfing with Mr. Gregory and Keith at Indian Mound Golf Course. Just a nice person to be around. Never mind he kick our butts on the course. RIP Mr. Gregory - Jim Martin
- James Martin

He was a great man and I always enjoyed playing pool with him at family holidays and for our pool team. I know he is in heaven getting his pool game back shooting a couple rounds with my dad. -Eric Vasey
- Eric Vasey

We will forever remember all the great times we had with Bill, the laughs, the stories, the celebrations, dinners, family events, campfires, fishing and the scotch 🙂 the Fullen family
- Fullen family

I wanted to offer my condolences for the loss of your father. I was sadden to hear of your loss. I wish you and your family peace and comfort during this difficult time. The ones we love are never gone; they live within our hearts.
- Judy Vallecillo

- Lorraine Butler
Sending love and sympathy to all of the Gregorys. Bill was a very special person and had a very positive influence on everyone he loved and befriended. All of you are in our thoughts and prayers. Ann and Bill Leaver
- Ann M. Leaver

Love to all the Gregory family,,,,our hearts are hurting for yu all,,,,,the Cunningham's. All are thinking of yu with. Love , Xxxxoooo
- Judith Cunningham.
Pat and I had many wonderful times at TP with Bill and Dot. One of Bill's biggest thrills was when he and Pat beat Dot and I at cribbage. Bill also enjoyed drinking a mudslide or two with me. My deepest condolences to the Gregory family. Judy Patrick
- Judy Patrick